Now onto Bethesda, Ubisoft and Square-Enix. I don’t have anything substantial to discuss when it comes to Nintendo’s Direct, aside from the following. Oh, the guy from Dragon Quest 11 and Banjo-Kazooie are in Smash Bros now. I’ll be more attentive when the Doom Marine shows up. Oh, and there’s a Zelda: Breath of the Wild sequel coming. Should probably finish that one day.

image from One Angry Gamer

Of the many newly announced games at E3 this year, the most I wanted to see actual gameplay from was this one. From the creator of Resident Evil, Shinji Mikami, and his studio Tango Gameworks, the makers of the solid survival horror series, The Evil Within, comes Japanese Ghostbusters. No, not like Luigi’s Mansion.

At least that’s sort-of the idea the CG trailer hints at. A sudden paranormal event happens over Japan’s largest city. A huge portion of the population disappears like it’s either Left Behind or Thanos just being bigoted against the Japanese. Some samurai looking fellow, resembling Clint Barton’s Ronin from Avengers:Endgame, roams the streets searching for something…spooky.

The idea of exploring a haunting, spirit filled Tokyo metropolis searching for answers and ghosts to fight sounds like an awesome time. It’s not going to be survival horror like Mikami’s earlier work. Rather, you take the fight to the horror. Until I actually see Ghostwire in action, the promise is what’s exciting me. Maybe the actual game will change that, but hey here’s hoping whatever you end up doing makes you feel good.

The game coming most soon to a console or PC near you, the latest Wolfenstein is a side story taking place two decades after the divisive Wolfenstein II: The New Colossus. Instead of the emotional,Nazi-slaying hunk BJ Blazcowicz, you play his two grown up( or nearly so) daughters who wish very much so to continue in the family tradition. After all, the war to liberate the world from the Nazis is far from over.

Based on what I’ve seen, Youngblood looks smooth, bloody and very much in the spirit of the successful series reboot that’s been ongoing since 2014. It seems to have a heavier emphasis on the gameplay side than the controversially more story( read: cutscene) driven New Colossus. Makes sense, as it’s the franchises first stab at a co-op experience. Sure, you can still play by yourself, though I haven’t yet seen any footage of that style yet. But whenever a game features a co-op side to its story mode, it’s a flip of a coin whether it hampers the quality of a solo experience. Gears of War managed to make both options work well, but Dead Space 3 and to a lesser extent Resident Evils 5 and 6 did not.

I’m still expecting great storytelling from the Swedish developer MachineGames, more fun ways to make fascists cry for mein mutter and hopefully well realized levels to explore. I won’t have to wait long to see if it was a worthwhile detour from Wolfenstein III.

Another promising game announced that did the disservice of not actually showing the game. While I already expressed more interest in Ghostwire being shown off, the outrageous concept of Deathloop, that of two blaxploitation-like characters trying to find a way to break the titular time problem by killing the other, seems ripe to show, not tell.

Set on a mysterious island called Black Reef, the two “heroes” are going to explore levels French studio Arkane’s applauded open ended, do-it-your-own-way fashion and somehow that will translate to the two finding each other and letting it rip with the gun theatrics. How this actually plays out, aside from the promise of more of Arkane’s enjoyable style, both visual and mechanical, has yet or at all to be seen. 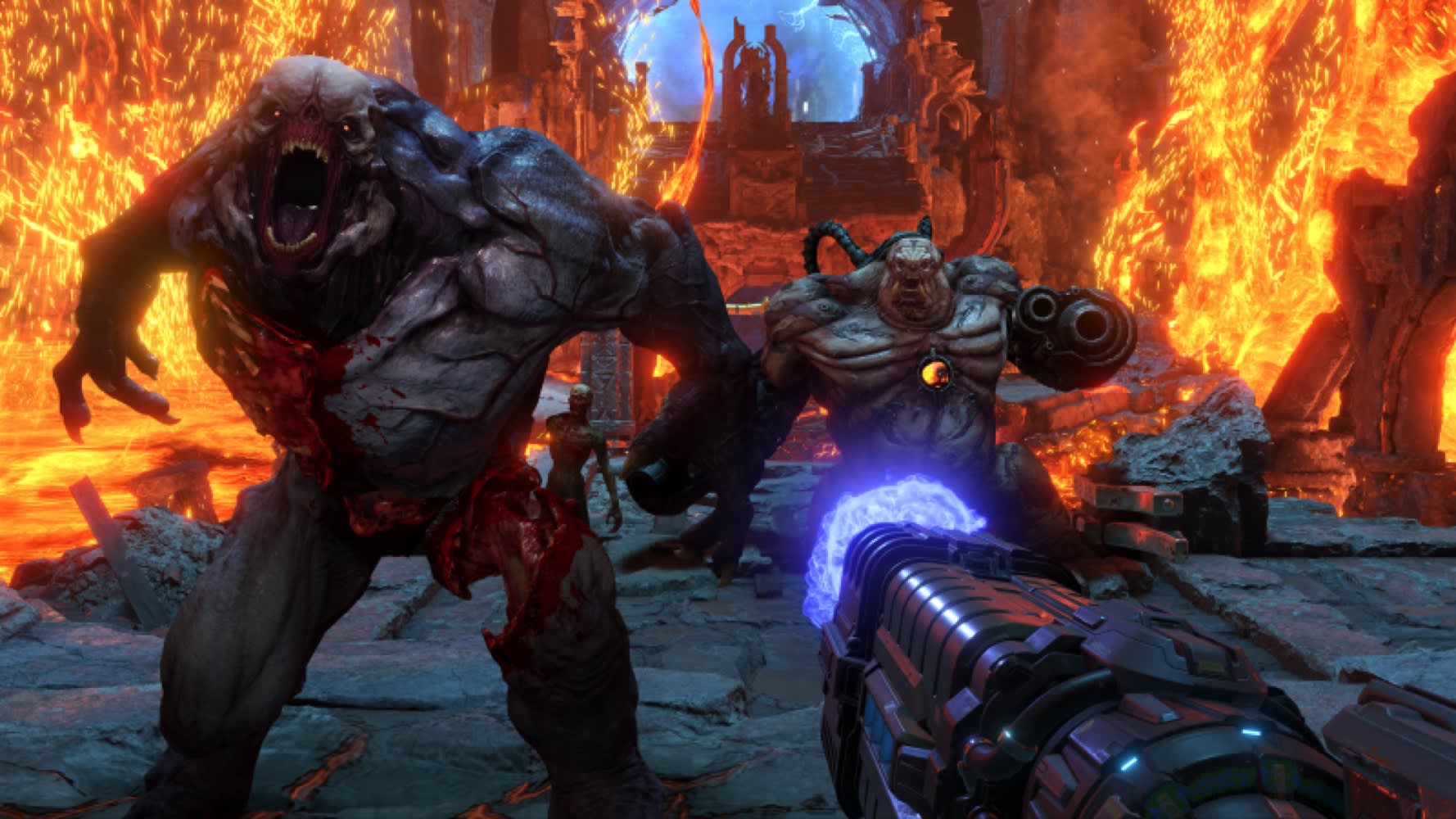 Here’s an abridged way of expressing my view on this game, coming thankfully this November.

That being said, it’s great to know that a franchise approximately as old as myself is finding new life in dealing out cool looking death on the scum of hell. Also, Army of Darkness, which is shown above came out the same year, 1993, as both myself and the original Doom.

When it comes to making a hard fought but worthwhile power fantasy, Id Software’s new modern yet faithful take on Doom is where it is absolutely at. The demons are many, but not insurmountable, the colorful levels pop with color and promise of rewarding secrets to discover and plunder. The amount of ways you can run, jump and traverse locations going from Hell, Mars, Phobos( a moon of Mars), Earth( now with Hell) and even Heaven is making me giddy with righteous excitement. If the 2016 reboot wasn’t clear enough, it’s that reboots of old properties are not always without merit. They can unite new and old fans together and make you appreciate the lessons of the past.

I live in a time when pre-ordering your game is now looked down upon for good reason. Plenty of “promising” titles like Anthem, Star Wars Battlefront I and II and Fallout 76 give you intense buyer’s remorse. I didn’t have it with the Resident Evil 2 remake earlier this year and I am confident that pre-ordering Doom Eternal will be the same great story.

Dante’s Inferno is more fun with a gun. And not just one.

Image from Push Square (Yes, what you are looking at above is real)

What if V for Vendetta was a video game, and the Guy Fawkes like V could be any citizen of London who wasn’t working for the authoritarian police state? Well, that’s the third Watch Dogs game,Legion, and it seems far more ambitious in scope in term of sheer logistics than anything else I’ve viewed.

Despite my definite approval for the concept and setting for a post-Brexit England having gone definitively Orwellian, I do have apprehension on the execution of being able to recruit any person in London and making them part of the anti-surveillance resistance movement known as Dedsec. Imagine the incredible amount of scriptwriting to record decent dialogue and backgrounds for what could be hundreds if not thousands of Londoners? Then, put into consideration, making these same recruitable members have enough unique features in skills and gameplay possibilities.

This is most certainly a promising concept that could, as they Brits say, “go tits up”. But it is certainly an experiment which both pushes forward on the original idea of Watch Dogs, being able to hack into everyone’s private information, with almost countless private stories waiting to be uncovered. We won’t have to wait that long to see if it all works out, with March 6, being showtime.

Well, I didn’t expect this to catch my eye. Aside from the Kingdom Hearts series( of which I shamefully gave up on the third one out of disinterest), I have not held any real connection to Square-Enix’s flagship franchise that has been around since 1987 (sure is “final”).

I have never played the original 1997 PS1 version of the game, but I am well aware it remains a cherished entry for the series, a gateway for many fans, and the title that brought both the franchise and the original PlayStation’s pedigree to whole new heights. Perhaps, in a certain sense Final Fantasy 7 ensured Sony’s first generation would beat the-then king Nintendo.

What got me interested, aside from how captivating the visual style of the remake was, and in how it seemed remarkably faithful to the look of the original was its combat system which threw a bone to both the old fans and prospective new ones. Generally, its a real time RPG where your chosen member of your party fights without skipping a beat. However, through an activated “tactical” mode, the game goes into slow motion, and you get to decide what main hero Cloud or anyone else is going to do next in the fight. It both demonstrates the fluid beauty of the character animations, friend or foe, and lets your brain decide what is the best course of action, like the original turn based system.

Even outside of the combat, the newly realized city of Midgar looks like a fun place to explore. Getting to know your party members better in the off time like Aeris and Tifa, both of which are possible love interests I hear, and gruff, Mr. T-like Barrett sounds like a Mass Effect style good time even if there are substantial differences like no dialogue tree and well, you could build relationships with others anyway in the 97′ original.

The only problem is that while the game has a release date of March 3rd next year, the demanding nature of the project is putting the game’s development into two blu-ray discs full of content. It seems to me that the March release date for the remake is only for the first part and that the full game won’t be ready nearly as soon. Even then, its a PS1 blast from the past that does harbor in me similar investment to the successful remake of Resident Evil 2 this year. On that note, looking forward to a possible remake of RE3….

Like the Marvel Cinematic Universe, the new Avengers game from the makers of both the modern Tomb Raider and Deus Ex games have their minds on the long term, rather than the short. While I would appreciate a stellar start that doesn’t short change on stuff to do and assemble for, seeing an increasingly larger universe to take part in for no additional fee is quite marvelous in concept.

Starting off with Iron Man, Captain America, Thor, Black Widow and Hulk( Hawkeye strangely absent), this new slice of Earth’s mightiest heroes screw up big time when experimental technology on their helicarrier causes a catastrophic tragedy in San Francisco. Cap seemingly dies in the process and the Avengers five years later have broken up. Of course, they are going to reassemble and along the way some old friends will join the ride and bolster their ranks like Hank Pym.

I will say that the visual presentation, especially how the Avengers look, doesn’t seem quite right. They’re not exactly ugly, but almost seem like odd knock-offs of how we see them in the MCU. Also, not a lot of time was shown showcasing the superheroics possible, so I have no way of knowing how much mileage the combat system has. That will mean a lot for a game with a long lifecycle  planned post launch.

But, hey, I’m willing to give this attempt a shot and who knows what merry adventures could be in store? Could the Fantastic Four, X-men, Guardians of the Galaxy and others join in? Well, keep your ears up true believers.

So, as I said at the very beginning, a lackluster year not so much in lack of content, but in lack of how it was presented.