My commentary on films from the decade of neon and electronic synth continues into 1981 with six more movies I evaluate. The next retrospective collection will all be horror-themed as it more or less the Halloween season in late September. First, Micheal Mann’s debut directorial feature.

During the opening scene of crime director Michael Mann’s first outing, a very distinctive type of song is played by the German electronica band that composed Thief : Tangerine Dream. They have been involved in a lot of scores over their surprisingly long career, and one soundtrack they were recently regarded for was in GTA V.

The song that closes out the opening robbery that James Caan’s Frank commits sounds very similar to the opening credits of that same game. GTA V‘s main narrative hook is that of three distinct criminals coming together to perform a series of increasingly audacious heists through a satirical mock up of Los Angeles and central-southern California.

Caan’s Frank is loosely similar to one of the playable crooks: Michael, a retired heist-man who is both regretful yet nostalgic for the past. Frank is a Chicago safe-cracker who wants to leave the life and have a normal life with his girlfriend Jessie (Tuesday Weld) and their adopted infant son.

The movie treats Frank like the man he is, a scumbag but one that does earnestly want to stop. However, the thugs that run the business he’s in won’t make that so easy. It’s not so much about redemption like those Red Dead games from the people behind GTA but about accepting who you are in the environment you were cultivated.

The tragedy of Thief isn’t so much that a bad man can’t become good, Mann suggests, it’s that people like Frank, from his own realization, probably shouldn’t go good. Lest they hurt the innocents that come into his life.

I’ve only ever seen one other Mann film, Heat. That film also has a generally pessimistic outlook on the prospects of the criminal figure. In Mann’s world, it is often the wicked that best defeat the wicked. The wicked that survive are doomed to be alone. A better punishment than death, indeed.

Image from Vanyaland.com  (This dragon got mentioned in GOT. Just an Easter egg, though…)

It’s hard to imagine now, despite the high number of PG-13 films they release, but Disney actually did some pretty…heavy stuff in the interim period between their “Golden” age and their “renaissance”.

They co-produced a dark fantasy film alongside Paramount that involves partial albeit brief female nudity, bloody deaths, people being burned alive by a dragon, and gory animal corpses. Not to mention an undertone of an anti-theistic message, though set in the superstitious dark ages. it’s close to an R-rating, but seeing as how the PG-13 rating wasn’t born yet, this PG adventure must have been a doozy for the young who saw it.

What makes Dragonslayer awesome isn’t just that grainy, charming aesthetic to fantasy cinema the 1980s had in droves, it’s that it isn’t a straightforward good vs evil,kill-the-beast fable. It has a surprising deconstructionist twist.

The old wise mentor wizard Ulrich (Ralph Richardson) is snarky, above it all and not at all stuck in the clouds. I wouldn’t mind getting a hard cider with a guy like that. The fair maiden princess that is sacrificed for the dragon isn’t saved by or is even the love interest for our hero, Galen (Peter MacNicol), the sorcerer’s ward. It’s instead a meek yet courageous enough village girl, Valerian (Caitlin Clarke), who initially pretends to be male to avoid a lottery. A lottery where young virgin women are to be taken to “sate” the dragon, Vermithrax.

She gets Galen’s affections and rather than be damsel in distress, she helps him in creating and delivering the equipment needed to fight Vermithrax. Yes, their romance does come about a little fast but that’s more to do with the runtime than with the writing.

It’s a charming yet dark when it needs to be tale about the end of magic in the natural world that has a bittersweet tune to it all. Also, you get to see Ian Mcdiarmid pre-Palpatine by two years as a priest who gets deep fat fried. Like evil master, like dark apprentice.

Behold! The last time a big budget King Arthur movie was worth a damn!

Aside from apparently being visual inspiration for of all things, Zack Snyder’s Batman v. Superman( not kidding, look it up), Excalibur taught me that I didn’t know as much about the Arthurian legends as I thought.

Yes, there are varying interpretations of an English monarch’s reign that was almost certainly fictional, but I thought that good ol’ Arthur was a “Gary Stu” type of King, near perfect in his morals, leadership and kindness. Not really. Yes, Excalibur is a stylized and in some areas loose take on King Arthur, but a lot of the shockingly depressing beats are true of the source material.

King Arthur’s wife Guinevere and best friend Lancelot have an adulterous affair( I did know about that ahead of time). Arthur nearly wipes out the Knights of the Round Table by sending them on a nearly hopeless journey for the Holy Grail (I thought Monty Python made that up). Arthur and his evil incest-created son Mordred, kill each other in a last battle. I didn’t know Morgana Le Fay was Arthur’s evil half sister.

Whether John Boorman’s take on Camelot is the best is certainly undecided from what I hear. Many even say it is not, narratively, that good at all. Presentation-wise, considering the visual effects possible back in 1981, it’s spectacular.

There is something so enjoyable about watching a bunch of actors in super heavy, super shiny knight’s armor slash and clash with the accompanying catchiness of the sounds they make. The heavy duty style inspired the influential and gory as f**K manga/anime Berserk.

This Camelot is a silly place, but it’s worth visiting for Nicol Williamson’s brilliant yet morally dubious Merlin alone.

Image from horrornews.net (The voice of Sam Fisher is about to explode)

Scanners may be the poster child for a film everyone’s heard about due to one unforgettable scene but didn’t fully watch. Turns out, the rest of the film is well worth your time, assuming your stomach’s up to it. If you can get past a guy’s head exploding viscerally, then you should be fine.

What is a scanner? Well, it’s basically the powers of Jean Grey taken to the extreme, an extreme which Tetsuo from Akira would later showcase in animation. Basically, certain people are “gifted” with the ability to read minds and telekinetically manipulate other people and even the reality around them. Sounds awesome yet terrifying, right?

Well, it can be a real pain, especially when filtering out everyone’s thoughts. Cameron Vale (Stephen Lack) is tasked by a scientist (Patrick Mcgoohan)  who researches scanners to hunt down a rogue, revolutionary one, Darryl Revok, played by Micheal Ironside.

One of David Cronenberg’s most well known films and perhaps the earliest of his greatest hits, Scanners is good sci-fi, contemporary social commentary, full of pitch black humor and a great showcase of Canadian cinematic talent. No matter how you might feel about it, you won’t be able to say it wasn’t mind-blowing.

An American Werewolf in London

Image from RogerEbert.com (Lupin’s got nothing on this.)

John Landis, the director of Animal House and The Blues Brothers, gives you a horror comedy classic, which to my surprise doubles down on the horror.

Despite featuring one of the most famous werewolf transformations ever, I was unaware how much actual scares were in store for me. I haven’t seen Animal House, but I have seen and own Blues Brothers, so I didn’t think he had the chops to actually scare me.

There are a lot of effective jump scares as an American tourist, bitten by a English werewolf, undergoes the harrowing process of slowly becoming one himself. The one that drew the biggest shock was the dream within a dream psyche-out where first David( David Naughton) is dreaming of being back home with his family. His child relatives are watching a Sesame Street episode dealing with violence. His father goes to open the door to see who’s knocking.

His father opens to find Nazi werewolf soldiers, who then proceed to shoot the everlasting shit out of the entire family. He wakes up back in the hospital, recovering from his werewolf encounter. The nurse, who happens to be David’s easy going love interest Alex( Jenny Agutter) comes in for a regular check-up. Opening a curtain, a Nazi werewolf soldier proceeds to murder the hell out of her to David’s horror. Then he wakes up for real.

This mix of horror, surprise and pitch black comedic undertones is what really sells AAWWIL as a standout experience. Not only does it work as a then-update on the werewolf movie formula, it’s also titillating, suspenseful, funny, atmospheric and really sad.

A whole bunch of elements that shouldn’t work together but do. Then again, Landis made an absurdist masterpiece with The Blues Brothers, something that on paper should not have worked. He was the right man at the right time to make a story about a man in the wrong place at the wrong time. Specifically, a chilly full moon night in Northern England. 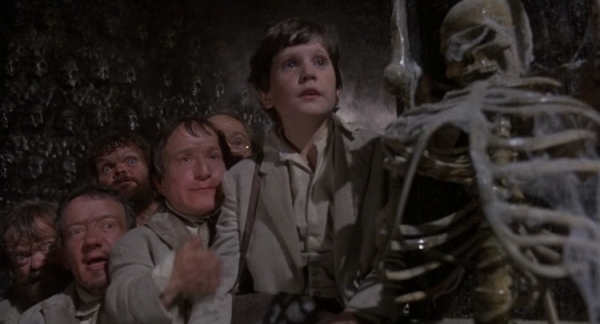 Image from nomorepopcorn.wordpress.com (Young Kevin and a motley crew of angel-dwarves or whatever they are.)

Terry Gilliam is one more director whose visual craft has not translated nearly as well in the 21st century as his reputation would suggest. If Time Bandits proved to me anything, it’s that Gilliam is more than a Monty Python member, he is or was a truly creative guy.

Ten year old Kevin is living a dull life in suburban England with the most inattentive parents I have ever seen in a motion picture. They are more into absolutely galling and bizarre British game shows hosted by Jim Broadbent than giving a toss to their imaginative son.

One night, a group of small, strange men crash out of his closet in search of something and Kevin is carried along for the ride. He and the Time Bandits proceed to explore and steal their way through the dark ages, the Napoleonic era, the Mycenaean period and more, ultimately landing in the supernatural Age of Legends.  There be ogres, giants, cowskull monsters and David Warner as the most British Satan ever.

The low key and occasionally laugh out loud funny British humor that Monty Python was known for is present, but it takes a backseat to a generally pleasing whimsy as Kevin keeps acclimating to each new adventure, using his love for history and legends to keep his footing. He even strikes up a friendship and near adoptive father in Agamemnon, who is much nicer here than he was in Homer’s Iliad and played convincingly by Sean Connery. Even with the Scottish accent.

The film’s sequences of jumps through time and space ultimately culminate in a light-hearted conversation about technology’s seductive grasp and how moral or even intelligent a creator of the universe would be in the state it’s in and has been.

Ralph Richardson, who I mentioned earlier as Ulrich the sardonic sorcerer from Dragonslayer, is back as the bandits’ rankled boss, the Supreme Being. God, if he were the most over-it British gentlemen ever.

Whether you agree with the points Gilliam and Time Bandits makes or are just captivated by the fantastical and honestly still great production values on display, one thing is clear to me. After all these years, Time Bandits is still worth your time.

I’ll be back after I watch the next six movies coming my way either by Netflix or on Amazon Prime. All of them will be suitably in tune with the spooky season upon us. Don’t forget your pumpkin spice whatever when the next post comes!